Trey Lance is the No. 2 quarterback on the San Francisco 49ers’ roster entering the weekend. BetMGM clearly expects his standing to change and recently trimmed his MVP odds by more than half.

Lance currently sits as one of the largest financial liabilities the book has in the NFL futures market. Two other quarterbacks — Justin Herbert of the Chargers and Baker Mayfield of the Browns — are the other large liabilities for BetMGM.

The 49ers selected Lance third overall in the 2021 draft but head coach Kyle Shanahan has insisted Jimmy Garoppolo will start for San Francisco. Garoppolo is +10000 to win MVP at BetMGM.

As of Tuesday, bets on Bills quarterback Josh Allen to win MVP totaled 10.4 percent of all 2021 MVP bets at BetMGM. Herbert was the next-highest handle in the NFL MVP market at nine percent. Allen is even with Tom Brady of the Buccaneers at +1400.

Chiefs quarterback Patrick Mahomes remains the unanimous favorite at U.S. sportsbooks. At BetMGM, he’s +600 and 8.5 percent of bets placed at BetMGM on MVP candidates are on the Kansas City star.

Packers quarterback Aaron Rodgers is the second favorite at +1100. 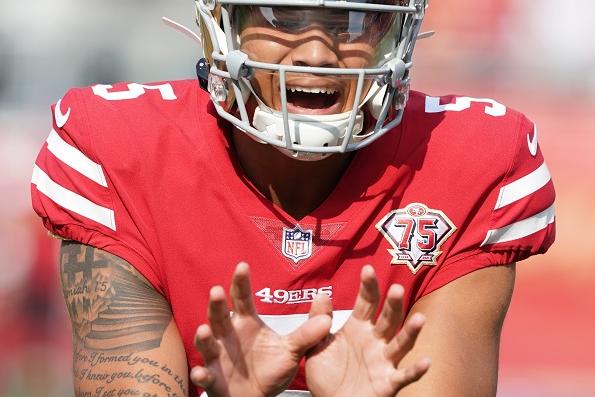